Bobcats vs. Eagles! Will the Eagles Take an Easy Win, or Will the Bobcats be Undefeated for Another Homecoming Game? 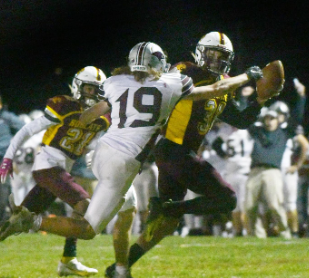 With Homecoming coming right around the corner, what’s better than watching and cheering the Bobcats at their football game? Get out a pad of paper and something to write with, because it’s time to take notes!

This year’s homecoming game will take place on Friday, October 28th, 2022. It will be held at the South Windsor High School football field at 3 P.M.  The Bobcats will be going up against Wethersfield High School.

“The boys will remain healthy throughout the season and during the next 4-5 weeks. We will be watching a film and evaluating the opponent. During the week before the game, we will implement a game throughout the video we watch, of course,” said Coach Hodge.

Coach Hodge explained the game from the previous year. “Last year, we played Hartford Public. We had food trucks and lots of fans. We beat Hartford Public, 30 to 24 in the last 2 minutes of the game. Touchdown scored by Ty Casey.” Casey is a proud South Windsor High School graduate from the class of 2021.

Are they mentally prepared? Hodge’s response, “They will be mentally prepared regardless because it’s five weeks away.” Seems that Hodge has everything under control, but he is keeping  information about their game plan top secret!

“You want me to share my strategy?!” Maybe he has something special for the team this year to make sure we win again. The approach seemed to be successful from our previous season, we’ll see what they have in store this season.

Speaking with Bella McKenna, the only girl on the Bobcats team, when asked how she thinks the game will go, her response was, “I think it will go great, I strongly believe we will win, and have a great homecoming.” The team loves how enthusiastic and hopeful she is. She’s making a great addition to the team this year!

It seems that the Bobcats are in for a good season, and a good homecoming, of course. We know that they’re going to try their best, whether they win or lose.

Come out and support our fellow Bobcats by wearing our school colors, which are maroon, gold, and white. Support our team and show your Bobcat pride. Hope to see you there to cheer on the team for the 2022-2023 Homecoming Game and all future games to come! Go Bobcats, crush those Eagles!