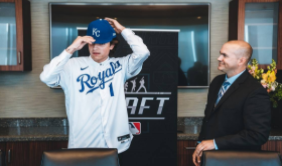 Most people who grow up in a small town like Ellington, Connecticut don’t end up getting signed by a major league baseball team, but that’s exactly what Frank Mozzicato did.

Frank Mozzicato is now a household name around the state of Connecticut. Ellington native, Frank Mozzicato over time went from a small-town kid to a baseball phenom.

Mozzicato attended East Catholic High School in Manchester, CT. Being a multisport student-athlete playing both basketball and baseball. Despite playing both sports, Mozzicato excelled in baseball.

During his senior season, Mozzicato posted a 0.21 ERA allowing only 1 earned run, striking out 113 in 46 ⅔ innings,Ho and also included 4 no-hitters in a row.

Because of Mozzicato’s skills Mozzicato, big games became even bigger. The East Catholic/ Southington game was one of the most talked-about games in the state at the time. At this point, both the Eagles and Blue Knights remained undefeated.

Many people went to the game to watch Mozzicato on the mound, because of this there was a lot of pressure on Southington pitcher, Sacred Heart Commit, Dante D’Amore.

“Before the game, there was a lot of excitement going up against another undefeated team and knowing he was going to be on the mound. It had a state championship feel to it.”, says D’Amore about the atmosphere before the East Catholic/ Southington game. 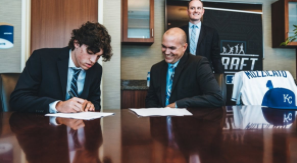 By the last out of the game, Mozzicato had thrown a 17 strikeout no-hitter against Southington leading the Eagles to an 8-0 win.

By the end of the baseball season, Mozzicato and the Eagles were the CIAC State Champs. Heading into the summer with the MLB draft right around the corner, Mozzicato was the number one prospect in Connecticut.

July 11th, 2021, is the first day of the MLB draft. This was a big day around the country for many baseball players, including Frank Mozzicato. Mozzicato was not even projected as a first-round pick by Bleachers Report 2021 MLB Mock Draft. Mozzicato ended up being drafted in the First Round, 7th pick by the Kansas City Royals.

“Personality,” Royals GM Dayton Moore said. “Personality is huge. Having fun, loving the game, loving his teammates, loving his community, deep respect for the game, a strong commitment to get better and be the best. Everybody who has seen him and interacted with him, very experienced evaluators who have seen him, loves him. They love his personality, his energy, his work ethic, and the excitement he brings to his team.” Moore said in an interview.

I was fortunate enough to have a conference call with Frankie himself and East Catholic Baseball Coach Martin Fiori.  In response to the question “What would you tell your freshman year self?” Mozzicato said “Definitely say have fun, take all the right things seriously, play cause you love it, it makes it easier, it makes you play better, don’t worry about the analytics. Have fun when you’re out there, never know when your last game will be.”When asked about Mozzicato before his senior year, Coach Martin Responded with::” Who is this kid? If he had a junior year people would know him a year older, Frankie came in, doesn’t matter JV or varsity, and had fun.”

During my conference call with Mozzicato and Fiori, a word that was used a lot was the word “Surreal”. A dream most kids wish for, is happening for 18-year-old Frank Mozzicato. After hanging up the phone from the conference call, I sat back in my chair and thought “Wow. I just talked to THE Frank Mozzicato.” The way he presented himself, the word choices he used, really gave me an insight into his incredible journey, and it goes to show, this kid is going to be something great.