Minecraft Caves update finally comes out and is disappointing 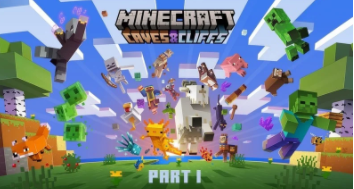 Minecraft has been really building their way up there very much promoting Caves and Cliffs Update. They promised the update to be released on June 9th 2021 and the world shook. Minecraft players everywhere were extremely excited to finally get this long awaited update along with many add ons and advertised biome changes.

However once the update became outed for the public it was realized that the only thing added to the game  was the cliffs portion which is arguably the lesser between caves and cliffs. While there were many new interesting changes the big portions of the update are still  yet to come in part 2.

Noah Pichay, a local Minecraft player, has a very heated opinion regarding the topic. ““The update was kind of a bummer, we have been waiting all year and they only released half of the update which is a shame I think they should have uploaded it all at once.”

While there are many with this opinion similar to Noah, there are many who are excited about part 2 and are still very much interested in the game. Ishayu Ray, a local South Windsor High School gamer, speaks on his opinions.

“I for one am completely fine with having them release it in parts, it is completely fine if they want to take their time and the mountain potion of the update was very entertaining. If anything it just gets me excited for the future.”

While we wait eagerly for Part 2 of the update, be sure to mine at night while passing the time.