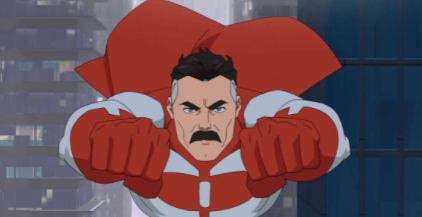 Amazon Prime’s new animated superhero series Invincible has been gaining a lot of traction lately and finally wrapped up its first season a couple of weeks ago. The show follows a young Mark Grayson living in a world full of aliens, robots, and superheroes. Mark’s Dad is this world’s superman referred to as Omni Man. The show follows Mark developing his powers and trying to live up to the name of his father.

The show also has an ongoing mystery that keeps the audience on their toes throughout the whole show. The show is surprisingly gory and adult for a cartoon series. Amazon prime does not hold back on how adult the show can get.

Dan Kotait a local superhero enthusiast says, “When the series began I did not expect the amount of gore and vulgar language because the animation style is so Saturday Morning cartoon, it completely threw me.”

Many people started to watch this with their kids and by the end of the first episode had to shut the show-off. This series is proof that with the ongoing superhero genre constantly growing we need shows like this to switch things up. Animation is an endless void of creative opportunity where the only limits are the creator’s mind. We should see more superhero properties developed in this sense.

Robert Kirkman the creator of the Invisible comic book series said, “This is the perfect climate for ‘Invincible’ to exist because it’s reliant on people knowing the ins and outs of the tropes of superhero storytelling so we can subvert them”.

Invincible had a stellar first season and shows superhuman levels of potential for years to come.