The Bobcat Prowl • May 7, 2021 • https://thebobcatprowl.com/4866/news/vaccine-supply-outpaces-national-demand-rates-fall-at-crucial-time/ 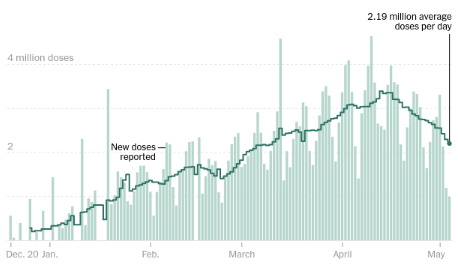 After months of record-shattering vaccine numbers, peaking this month at 4,692,928 doses administered in one day, the data shows what experts had feared: Supply of Vaccine is outpacing demand. Some clinics faced with declining demand are turning away doses, or shutting down altogether, like the efficient mass vaccination sites in Georgia. Appleton, Wisconsin health officer Kurt Eggebrecht, when asked about what his town is doing, replied “We’ll be getting 4,680 doses this week. That will carry us through our demand this week. And we were offered additional doses from that and we chose not to accept.” In addition, Pfizer has announced that their shipments of vaccines will be in smaller packages, to meet demand accordingly while saving doses for other countries.

There are many contributing factors to the decline in vaccine averages, one of course being the Anti-Vax movement and reluctant demographics. But the issue may lie in targeted outreach. The majority of Americans that remain unvaccinated either live in areas too far from the nearest clinic or site, are unable to reach the site, or don`t even know where to start. “If there were language barriers or transportation barriers, then we will be able to go out into communities and reach people right where they are if they weren’t able to get one of our larger clinics,” says Marsha Rodeffer, the Nurse Manager with the Central Shenandoah Health District in Staunton, VA. Transport for people in secluded areas like Rural or Urban America can be scarce. But fortunately, Uber is stepping up. A new menu in their app for Vaccine Appointments allows users to book an appointment, and get a ride via a nearby Driver. If they can`t afford the ride, Uber has announced that, in addition to the Vax program, Paypal and Walgreens have helped to set up the Vaccine Access Fund, which will pay for rides, if users cannot afford them.

In New York City, Mayor Bill de Blasio has announced that certain clinics in the City will now accept walk-ins with no appointment, new pop-up sites in areas that need access, and a new site in the lobby of the American Museum of Natural History.  “You can just walk up and get vaccinated,” de Blasio said, adding he was encouraging community health centers, including federally-supported centers, to permit walk-ins as well. “We think this approach is exactly right for this point as we continue to move forward. A lot of people just want it to be convenient and easy.”

Some states don`t have it as easy. With West Virginia struggling to vaccinate younger people, Governor Jim Justice has sweetened the pot with a $100 Incentive for young people who get the shot.

Despite the incentive, the numbers in the Mountain state don`t show signs of improvement.

The United States is expected to shift strategy within weeks to meet their new goal of 70% of the eligible population vaccinated. Additionally, Pfizer`s vaccine may receive authorization for children 12 and older, and may apply next month for full Authorization, the level above their current Emergency Authorization.