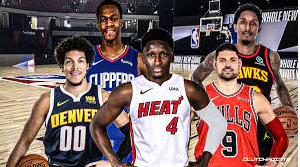 The NBA trade deadline was on Thursday, March 25th at 3pm eastern time and the day was filled with a wave of trades that could shape up the league.

The Orlando Magic came into the trade deadline, knowing that they would start to sell at the deadline, and that’s exactly what they did, trading all three of their biggest stars. First they traded shooting guard Evan Fournier to the Boston Celtics for a couple second round picks and Jeff Teague, who later waived his contract. Boston hopes this move can increase their playoff chances.

Also in a bit of a surprising move, the Chicago Bulls traded for Nikola Vucevic, who was the Magic’s all star this season for Wendall Carter Jr. and Otto Porter. The Bulls also gave the Magic two first rounders. The reason this was a surprise was because a report came out that although the Magic wanted to sell it wasn’t expected they would trade Vucevic unless it was a offer they can’t turn down. The 2 firsts is most likely what struck their eyes. As for the Bulls, it gives their all star, Zach Lavine some help in a attempt to make a playoff push.

The final trade for the Magic was their 3rd star, Aaron Gordon. He was traded to the Denver Nuggets for Gary Harris, RJ Hampton, and a first round pick. In all three of these trades the Magic acquired multiple picks for future drafts. The Magic will look to the future for now.

The Houston Rockets had already traded all-star James Harden to the Brooklyn Nets earlier in the season and just like the Magic they’re trying to focus on their future as well. The Rockets traded Victor Oladipo to the Miami Heat for Avery Bradley, Kelly Olynyk, and they also earned the right to swap picks in 2022.

The Toronto Raptors weren’t that busy at the deadline but they did trade Norman Powell to the Portland Trailblazers for Gary Trent and Rodney Hood. Powell had spent 6 years with Toronto, the only team he has played for. Powell was having a good season averaging 19 points per game(PPG) as well as shooting about 50% from the field. The Trailblazers hope this will add depth behind star guard, Damian Lillard.

There were also many rumors that NBA all star, Kyle Lowry who has spent the past 9 seasons with the Raptors was going to be traded, however that was not the case. In a article from CBS sports, Jasymyn Wimbish was surprised as well, “The biggest surprise was veteran guard Kyle Lowry not being moved, after the Heat and the Lakers were rumored to be the two teams discussing trade packages with Toronto, the Raptors ultimately felt that holding on to him was the better move.”

Also, the New Orleans Pelicans also elected not to trade starting point guard Lonzo Ball. His contract is up in the off-season so it will be interesting what goes down during free agency. The Bulls and Knicks have both been keeping an eye on him and are expected to make a push for him in the off-season.

These were the biggest deals made at the deadline as teams look to either make a push for the playoffs or sell for the future.