The Bobcat Prowl • May 7, 2020 • https://thebobcatprowl.com/4329/news/murder-hornets-spotted-for-the-first-time-in-the-united-states/

‘Murder Hornets’ Spotted for the First Time in the United States 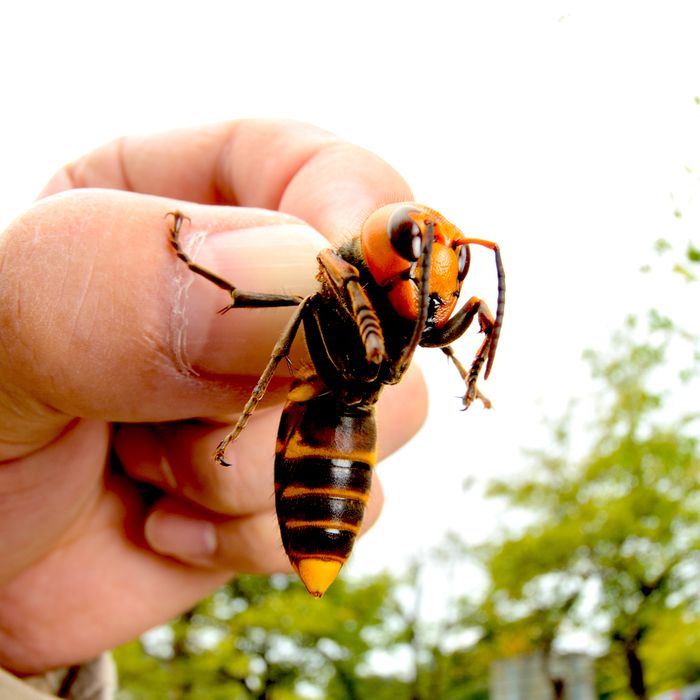 A new threat to the already declining honeybee population has made its way to the United States for the first time ever, researchers say. The Asian Giant Hornet, commonly referred to as the ‘murder hornet,’ who have been known to take out an entire colony of honeybees in 90 minutes, was spotted in Blaine, Washington earlier this year.

In late 2019, the spotting of an unusual hornet with orange and black markings and a long stinger in the same city was investigated by local wildlife experts. Now, experts have officially confirmed the arrival of these incredibly dangerous hornets for both the honeybees, and the ecosystem in the state of Washington. These hornets, who are usually between 1.5 and 2 inches long, have black and yellow striped abdomen and a large orange-yellow head with beady black eyes. Although no current sightings have spread further than Washington State, scientists are worried about the possible threat they pose to the already diminishing honeybee population and humans.

The main concern of their presence experts say is the threat they pose to the honeybee population. Within the past year, the honeybee population has faced a 40% decrease due to conflicts like climate change, increased pesticides and the destruction of habitat. WSU Extension entomologist and invasive species specialist, Todd Murray, told WSU insider, that the “shockingly large hornet” is a “health hazard , and more importantly, a significant predator of honey bees.”

With the new arrival of this new invasive species, the honeybee population faces an even larger threat of a greater decline. In late summer or early fall, these worker hornets, who were established by the queen hornet in April, go through a phase called the “slaughter phase.” Within this phase, they begin foraging for food, swarming the honeybee hives, cutting off their heads, and sucking out the hives larvae and pupae to bring back to their burgeoning nest.

Although these “murder hornets” are responsible for 30 to 50 human deaths a year in Japan, these hornets tend to keep to themselves unless they are provoked or feel threatened. Unfortunately, researchers have linked the sensation of the sting from these Asain giant hornets to the feeling of having a hot nail driven into your flesh. Ouch.

However, the entomology collections manager at the Smithsonian National Museum of Natural History, Floyd Shockley said, “You shouldn’t worry about it. More people die of honey bee stings in the U.S. than die annually, globally, from these hornets. About 60 to 80 people die from [allergic] reactions to honey bee stings [in the U.S.]; only about 40 people die per year, in Asia, mostly in Japan, from reactions to the [giant hornet] stings.”

Tim Lawrence, the associate professor and Island County Extension director at Washington State University said, “We’re still trying to determine the extent of the infestation. We don’t want it here.” Numerous traps have been set up around the region of the spottings, targeting the queen, with the goal to “eradicate” the pending problem. Once the hornet is caught in a trap, a string, streamer or even a remote RFID tag is attached. This allows authorities to trace it back to its hive, which will allow them to take care of the bigger picture.