Connecticut Reports Its First Deaths During the Coronavirus Pandemic 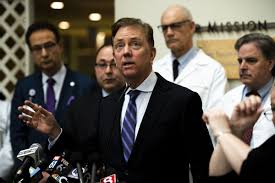 With the Coronavirus pandemic taking over the world one patient at a time, the reality of the situation for many has changed as the situation gets more and more serious. As of now, there has been over 200,000 cases and over 5,000 deaths worldwide in the past few months, but the virus has only just made its way to the United States, and now, Connecticut. As of March 18th, the first confirmed coronavirus related death in Connecticut was revealed at 4pm, and not even 24 hours later, another was revealed. The second was revealed on March 19th at 8am, and at 6pm that same day, the third coronavirus death in the state was revealed to the public.

To start, the first man to die from the Coronavirus was 88 years old and was a resident of the Benchmark Senior Living facility at Ridgefield Crossing. This man was admitted to Danbury Hospital on Monday, March 16th, was diagnosed with COVID-19, and passed away early on Wednesday morning. It was revealed that no patients at the assisted living facility had been diagnosed with the virus before the 88 year old, but as soon as he was diagnosed, the facility made sure to quarantine anyone who had been in contact with him. As of this moment, there has not been any other confirmed deaths from this facility. This first Connecticut death still is a shock to many, including Governor, Ned Lamont, as he announces “it makes this so real for all of our families. … Nobody can plan for this wave that’s breaking over our country right now. It’s coming faster than we could have ever expected.”

The second Connecticut death related to the Coronavirus was announced on Wednesday night by a New Canaan Councilman, Steve Karl. He revealed that 91 year old, Bill Pike, had passed away on Wednesday at Norwalk Hospital. Although the New Canaan native was being treated in Norwalk, the man was the state of Connecticut’s third case of COVID-19, and was the second from New Canaan. Pike began showing the symptoms on February 29th and was admitted to the hospital on that same day. During the following weeks, Pike’s family visited him frequently and even thought that he was getting better, but when he was diagnosed with the virus, they were put into isolation. On Wednesday, Pike’s condition took a turn and he passed away later that day.

The most recent death by COVID-19 occurred on the morning of March 19th, with another New Canaan resident passing away. There is not much information in the public about this man, but he was in his 80s and he lived in his own private home, much like Pike.

As the amount of cases and deaths rise, the state is making some changes to the way it’s residents live. Lamont has announced the closure of restaurants and sit-in dining, unnecessary businesses (like the movies, mall, and places that exceed over 50 people), and salons. Along with this he has pushed back the Connecticut primary date from April 28th to June 2nd. With so many people being impacted by this virus, it is only the smart thing for our state, and country to do. By the state limiting human contact, we can only hope that it will slow down the spread of the virus in the upcoming weeks and months.