Are you a Plastic or a Heather?  Both Mean Girls and The Heathers address the depravity of high school and how infamous cliques terrorize and target those below them on the social ladder. I will examine and compare the plot, humor, quotability and the legacy of both films. 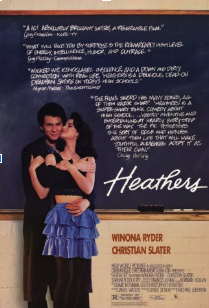 At Westerberg High School the entire student body lives in fear of the Heathers. A clique of three rich, attractive girls led by the cruel Heather Chandler. As the groups unofficial fourth member, Veronica Sawyer, participates in the Heather’s vile schemes while secretly hating her so called best friends. Following a volatile night out with Heather Chandler, Veronica and an outcast named J.D decide to play a little prank on the Heathers’ leader. Veronica and J.D attempt to trick Heather Chandler into drinking a mundane but disgusting concoction of orange juice and milk. However she accidentally ends up drinking a drain cleaner. Heather Chandler ultimately dies from the grave mistake. The murderers attempt to stage the accidental murder to seem like a suicide. Only making things worse as a slew of dead bodies begin to pile up. Resulting in a now psychotic J.D forcing Veronica to choose between her reputation and morality. 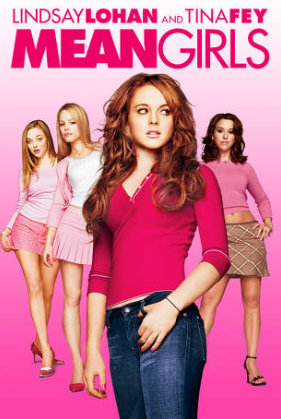 Regarding the movie Mean Girls, after joining North Shore High School after growing up in Africa, Cady Heron quickly learns wild animals are nowhere near as vicious as teenagers. In a community segregated by cliques, the Plastics stand at the top of the social food chain. Spurred by a classmate with a vendetta against the group, Cady joins the Plastics in order to take down Regina George, the school’s queen bee who rules the hallways using blackmail and her status. Cady sabotages and usurps Regina as the plastic leader steadily becoming more and more like the manipulative bully in the process. Regina and Cady’s war causes the entire school to fall into chaos, but Cady ultimately accepts responsibility for her actions and realizes everyone is wonderful in their own way which helps the Plastics grow as people.

Both movies boast well written plots with interesting characters; that being said Mean Girls plot is far tamer then Heathers. Due to starting out as a naive outsider Cady’s coming of age story is far more predictable and lacks much in the way of lasting negative consequences. Comparatively Heathers is dark, intense and twisted giving them a leg up in points for plot. 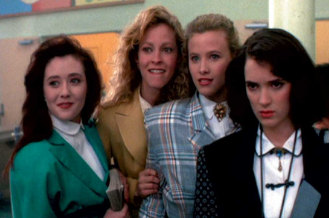 Secondly humor, Heathers is a quintessential black comedy tackling themes such as rape, teen suicide, peer pressure and school shootings. Heathers frames many of these sensitive subjects as fads to be adopted and discarded by a cynical student body concerned only with social standing. Rather than lovingly mocking the romanticized idea of high school Heathers viciously satirizes affirmative teen comedies while delivering line after line of hilarious banter. The humor is irreverent, sharp, and harsh.

Written by Tina Fey Mean Girls blends the comedian’s Saturday Night Live humor with a grounded concept. Although the jokes are mostly crowd pleasers Mean Girls possess enough of an edge to give punchlines a noticeable bite. For example the teacher Tina Fey portrays within the movie is falsely accused of being a drug dealer. Consequences of toxic rumors that are evident in every high school. While Cady’s background in Africa leads to a few hilarious and visually exciting metaphors between an African Safari and an American high school. Mean Girls producers also casted Amy Poehler as Regina’s “cool mom” certainly a point in the movies favor.

Regardless of someone’s age group or background Mean Girl’s witty and accessible humor should guarantee at the very least a couple of belly laughs. Dark comedies are a tougher sell and a certain frame of mind is necessary to truly appreciate Heathers, however when the jokes hit they hit hard. Even if Mean Girls is a slightly safer bet, both movies stand up to repeat viewings and offer something for adults and teenagers. Personally I would call these movies tied in terms of humor.

Next I will measure their ability to be remembered and quoted through the ages. Whether staging a suicide or playing a game of croquet Heathers always has the perfect thing to say. The movie is oozing with sarcasm and cynicism with the most memorable lines of dialogue being simultaneously shocking and funny. The movie helped popularize phrases like “What’s your damage” and “Lick it up,” although everyone knows that Heathers greatest quote involves a chainsaw.

The wittiest dialogue in Hollywood means nothing without an audience willing to listen, Mean Girls is not only filled with snappy one liners but at release the teen flick could not be escaped. Lines like “Get in loser we’re going shopping” and “on Wednesdays we wear pink,” are quoted seemingly daily as memes or casual references. Snappy dialogue is one thing but Mean Girls transcends cinema to become part of everyday life as “It’s so Fetch.”

Heathers dialogue is a bit too subversive and stylized to be particularly applicable in daily conversations, combined with the fact that the movie bombed at the box office and predates social media, Heathers status as a cult hit limits its quotability. On the other hand Mean Girls came out at the perfect time to profit from the pervasiveness afforded by the internet. More importantly Mean Girls quotes work fine outside of the movies context and are more likely to be recognized. While both are stuffed with memorable lines of dialogue Mean Girls has Heathers beat in quotability.

Lastly the movies legacy, in a decade defined by John Hughes comedies and sugary teen flicks Heathers gave a shock to the system, despite utterly flopping in theaters Heathers remains one of cinema’s defining teen movies and could really only have been produced during the late 1980’s. Any subsequent edgy high school comedy is likely to be compared with this classic and most fall short of the mark. Twenty years after hitting theaters Heathers spawned a lighter off broadway stage musical that proved popular enough to secure a run in London becoming providing the film with a new breath of vitality. Allowing new audiences to become beguiled by Heathers incredibly intelligent humor and critiques of American high school.

Mean Girls too has continued to shine in the modern era. The movies distinct and wonderfully portrayed characters have allowed several audiences to relate and enjoy the witty banter between these characters for years. It too has not shied away from a musical interpretation, 2017 the musical phenomenon gained enough notoriety to enter Broadway. Just as Heathers the movies ability to grab audience attention through its iconic images has allowed Mean Girls and Heathers to withstand the test of time and be proclaimed as two of the most pivotal teen movies in cinema history.