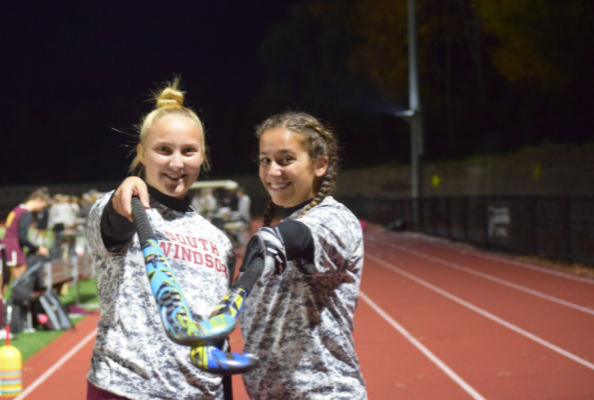 Saylor (left) and Cardinale (right) show off their bright smiles as they prepare to encourage the team to find passion and put their best foot forward.

Throughout the Bobcat’s field hockey season, the captains have been a powerful backbone to every aspect of the team. Senior captains, Morgan Saylor and Gianna Cardinale, brought a new beat and level of intensity to the girls’ game this season. As captains, they have not failed to lead each to be the best teammate, player, and student that they can be.

Both Cardinale and Saylor have been playing field hockey since middle school and feel that as captains, they are capable of circulating their extensive knowledge about the sport to the team. They also wanted to become captains to be given the opportunity to lead the team through whatever the season puts in front of them. Although this leadership role is linked to field hockey, they had other motives to continue to help their teammates off the field as well.  One of Saylor’s intentions was to create a new atmosphere for all the players at practice and at school. “I tried to encourage people on and off the field to feel comfortable and confident,” Saylor explains. Her success in creating a comfortable atmosphere for the girls was reflected through the newly strong bond that every player has with each other. On a similar note, Gianna Cardinale was also contributing to the open environment on the team by adding positive encouragement. “I always try to cheer people on and I felt like that was helpful for the players because people play better when they feel encouraged,” says Cardinale. Her positive cheering never fails to encourage the girls to continue working hard, no matter the mistakes that they have made.

Although the Bobcats have seen some tough losses throughout the season, two teammates they can always count on are Saylor and Cardinale. Both of the captains radiate positivity to help the team keep their heads up and play their best. The two infuse every player with their knowledge and experience to build more consistent players for both the current and future seasons.

Outside of field hockey, both girls are involved in many other important activities. Cardinale is a co-president of SWHS’s very own SADD club. As the holder of this position, her job is to help organize the meetings and publicize how important it is to make smart and safe decisions. While Cardinale is involved in the SADD club, Saylor takes part in helping the youth lacrosse program as both a coach and a referee. Additionally, she is deeply occupied with the unified sports programs in and out of our high school. Both these girls reflect their strong leadership skills through the many other responsibilities that they juggle, among their home lives and successes in school. These after school activities have really helped Cardinale and Saylor become great captains throughout the season.

All in all, Cardinale and Saylor are leading the team into the state tournament with a bittersweet feeling. As seniors and captains, they are both excited about being able to play their hearts out in a few more games, but still wistful that their field hockey careers are about to come to an end. As captains, they have left an unforgettable effect on the dynamics of the team that will continue to help the girls through future seasons.