An Overview of the 2019 Cross Country Season 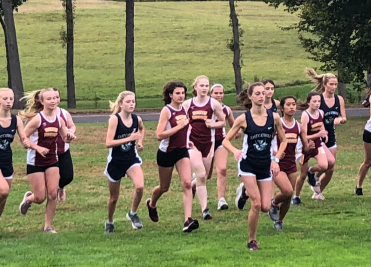 The Girls XC Team in action against East Catholic

Although the girls cross country team did not win as many meets as hoped, senior and captain, Sara Wills explained that “we had a lot of injuries but we had a lot of fun and the team was very close and supportive this year.” Wills says that she continued to participate in Cross Country because of the ethics of the team. She says that everyone is great and fun to be around. Spending her last year on the team, Wills was able to break 24 on the home course which took place at Nevers Road Park, which was her main goal for this season. Wills also tells us that, “invitationals are always chaotic because there are so many runners, but they help to push you and run faster.”

Co-captaining along with Wills was senior Armina Sarin, who also emphasized the team’s chemistry. “The team is amazingly goofy, open, kind, and close. Honestly the best team in my entire high school Cross Country career!” The Cross Country team typically goes through a general routine when warming up, in which they do repeats running hills, go on a free run, scavenger hunt, and will sometimes get ice cream after practice.

One big idea evidently shown throughout the entire cross country team was the bondage created between athletes. Sophomore Emma Metevier tells us that, “even though you lose meets you still are having fun with your team as a family and getting to have the experience”.

Looking towards the boys cross country team, Senior and captain Manny Mokel says that they hosted the Harry Geraghty Invitation for the third year in a row while placing second in their division. “Our overall record was 7-7. This year was a bit of a transition with a lot of new runners, but everybody saw a lot of improvement throughout the season”. The team typically runs between three and six miles per practice. One big thing Mokel took away from the season is, ‘running in the off-season and on weekends is really important for maintaining your fitness, and flushing out lactic acid.”

Looking towards Varsity Runner, Vincent Kuchipudi, a sophomore, who says that, “this season was the biggest impact because there was a lot of competition and [he] wanted to make varsity. Kuchipudi was able to connect with the upperclassmen while making new friends. His favorite part of the season would be the easy workouts after meets because it helps him to better connect with friends on the team.

With school sports like Cross Country, family and togetherness is the main ideal seen throughout both the boys and girls teams and also helps the two teams create a bond that builds team chemistry.