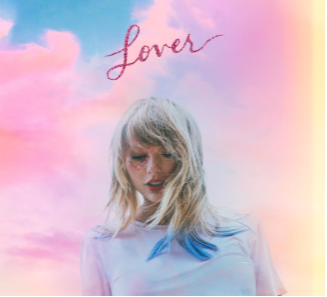 It seems that every album of hers breaks a new record. Most awarded country album, only album to have five singles reach #1, and many, many more. With each one comes a variety of new accomplishments. Despite spending the majority of her career as the media’s punching bag, she manages to come back each era stronger than ever. It’s Taylor Swift, the ten time Grammy award winning singer-songwriter phenomenon. Her newest album, Lover, managed to somehow exceed the expectations of many, including myself.

The album contains multiple songs that are reminiscent of the “Old Taylor” – the Swift of Fearless and Speak Now, cowgirl boots and sharpie induced tattoos. Lover, the albums namesake, is notably one of the songs that sounds similar to her older music. Yet, with more experience and knowledge, the new album does a lot of what Swift’s old music does – but better. It has the pop bops of 1989, like Cruel Summer and The Man, the edgy tracks of Reputation, like Miss Americana and the Heartbreak Prince, and songs like The Archer and Soon You’ll Get Better (feat. Dixie Chicks) that will pull at your heartstrings.

Miss Americana and the Heartbreak Prince is one of the songs that absolutely solidified Lovers place at the top of Swift’s albums. The entire song being about the political climate of America, concealed by the metaphor of an American high school, makes it one of the most creative songs written by Taylor Swift. There is simply no song like it on any of her other albums. Furthermore, as per usual, Swift picked a phenomenal song to close the album: Daylight. However, this song experiments with a technique Swift has yet to end an album with – a clip of her speaking. At the end of the audio clip, she makes a statement that perfectly sums up her album, “I just think that you are what you love.”

After her album Reputation, many fans lost interest in the edgy new sound they were witnessing. Yet, after hearing the masterpiece that is Lover, many came right back. Mackenzie Mason, senior, stated, “Lover made me love Taylor Swift again.” Brooke Stickles, also a senior, agrees, and says, “I like the old Taylor and I like the new Taylor.”

Overall, after experimenting with new sounds and going through new experiences, Swift released an album that is undoubtedly her best. An honest, emotional, and unique collection of songs, it proves that thirteen years into her career, Taylor Swift is still doing what she does best.