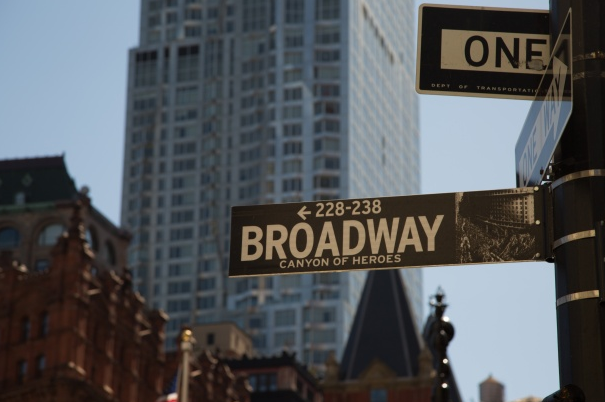 This past Wednesday, April 17th, a group of kids from the music department went on a day trip to New York City to see a Broadway show among other things. The trip was open to kids in all three music programs which are choir, band and orchestra. The trip happens annually and is a favorite amongst those in this program. Mr. Martineau and Mr. V organize the trip and do a wonderful job at it.

This year they were originally supposed to see the musical, Anastasia, but unfortunately it ended up closing before we could see it. Due to the change in plans we ended up going to see the musical, Oklahoma! There were many mixed reviews on this rendition of the musical because it took an interesting turn throughout act 2. The directors decided to make some artistic decisions that differed from what Oklahoma normally is. Junior, Allison Samsel, “was not a big fan of it just because it seemed very odd and strange.” It is true that there were some different aspects to this show compared to other Broadway performances. One of the main ones was that the theater was shaped as a circle so audience members actually sit on three sides of the stage. Another difference was that there were very few props and the lights stayed on for majority of the show. Not only that but the pit band who would normally be concealed was right on the stage with the performers and they even had interactions during the set. Not only was the set design a little strange but the musical did take some weird turns by incorporating modern dance, scenes in the dark and lots of fake blood. However, others on the trip really enjoyed the show. Senior, Megan Phadael, “loved the scenes in the dark because they felt spooky and kept you on the edge of your seat.”

Overall, the show was good and had amazing performers in it who have all been in previous Broadway productions before. The unique spin they took on the typical Broadway experiences made in something no one would ever forget.

Another part of the day trip was going to Rockefeller Center for lunch and to shop and after that getting to walk around Times Square. It is routine that when we go on this trip that we have lunch at Rockefeller Center but due to the small number of us this year, it was a a special treat that we got to go to Times Square. Going to Time Square was the favorite part of the day especially for people like Alex Amoro who “loved taking pics in front of all the billboards and buildings.”

The trip was a great success and left students smiling by the end of the day. I would recommend for any music department student to try to go at least once.