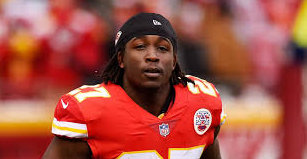 On Friday, November 30th, the Kansas City Chiefs issued a statement on their Twitter account that they had released their All-Pro running back Kareem Hunt effective immediately. This news came out just hours after a video emerged from TMZ of an incident regarding Hunt and a woman in a Cleveland Hotel last February. The video shows Hunt pushing and kicking the woman in an altercation with her and several of his friends that night. The incident had been previously reported on, but until Friday there had been no video evidence to back up the incident.

The video was first released to the public on Friday through TMZ, where the video shows Kareem pushing and shoving the women in the hotel. Several of Hunt’s friends come in and try to pull him away from the girl, but Hunt manages to push one of his friends into the girl and onto the ground. After the incident appeared to die down, Hunt then walks up to the same girl and kicks her to the ground. Police was called to the scene, but no one was arrested and no charges were filed.

A couple hours after the video had surfaced, the Chiefs made a statement via their Twitter account saying that they had been aware of this incident back in February, and the NFL had been conducting an investigation to find anything. But Kareem had apparently not been entirely truthful about the situation, ultimately forcing the Chiefs to cut the young running back.

Kareem Hunt, since the video was made open to the public eye, has been released by the Chiefs permanently and is also placed on the NFL’s commissioner exempt list. This means that Hunt cannot practice, play or attend any NFL games until an investigation conducted by the NFL has reached a decision as to what will happen with Kareem Hunt’s future.

Kareem has also made a public statement about his actions, saying, “I deeply regret what I did. I hope to move on from this.” He has also appeared in an exclusive interview with Lisa Salters on ESPN to further explain what happened that night, how he is planning to change, and what his plans for the future are.

Jordan Dill, a sophomore at SWHS has been a long time Chiefs fan. He says that “I 100% agree with the Chiefs’ decision, he made the wrong choice and lied to the organization instead of telling the truth.” He also says that Hunt, “…should never play football again in the NFL after what he did to the woman and the Chiefs. The NFL has become ‘smarter’ with these cases of violence and should either suspended him for several games or expel him from the league.” With all the details that have come out in this story, it is hard not to disagree with Jordan and his stance with what the NFL should do with the star running back.

Gabe Galley, senior, speculated about how the loss of Kareem could impact the Chiefs in the near future. He believes that “Losing a star running back is never positive for any offense. However, due to the extremely multifaceted nature of this offense, and judging by its performance on Sunday [against the Oakland Raiders], there is still potential for success.”

Although the loss of Kareem hurts the Chiefs, that doesn’t change them from being the top team in the AFC, and still loads of pro-bowl caliber players with Patrick Mahomes II, Travis Kelce, Tyreek Hill and Sammy Watkins. The running game is bound to decrease, but there’s still a good chance that Patrick Mahomes II and this powerful offense can do some serious damage come playoff time.