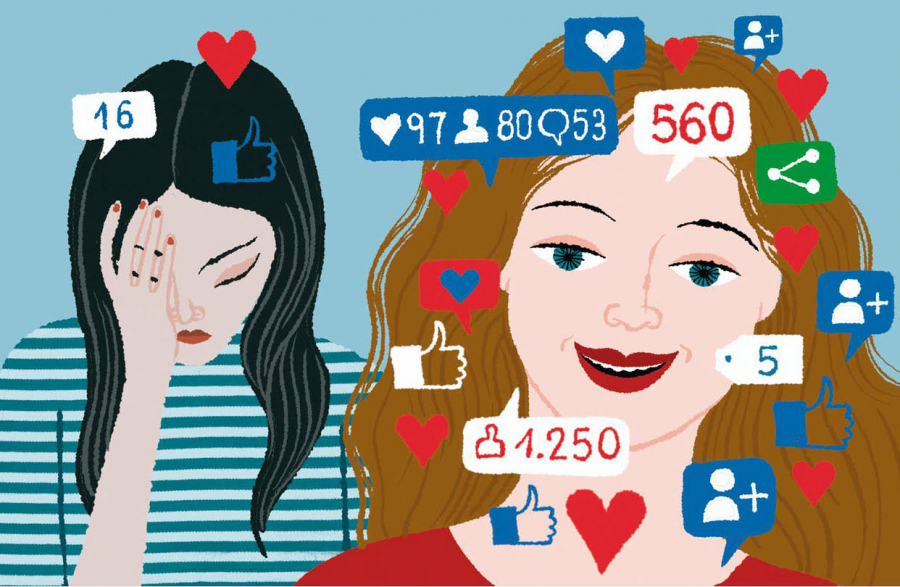 In 2018, it’s almost impossible not to have some sort of social media since it invades our lives everyday. As someone who has instagram, snapchat, and an array of others, I can understand the pressure to have something, to be able to communicate with your friends and get news on what’s trending. As social media climbs the charts, the pressure to have it gets even higher. But personally, I think that it is overrated.

Many people started out by getting instagram, most when they were 12, some most likely younger. It then progressed to snapchat, to twitter, some getting Facebook. According to junior Bailey Puebla, “my parents had put strict restrictions on my phone to try to shield me from the evil of social media. Because of that, I felt obligated that as everyone else was getting it, I also needed it or else I would be the ‘black sheep of the class.’” Social media has progressively made people feel like they fit into the normality of teenage life. There are definitely positive aspects to all of these platforms including the building of self-confidence, creating friendships, and overall social awareness. According to Family Insights, “68% of teenagers claim that social media provides them with support during difficult times.” It can provide them with a platform to communicate their feelings and get support from their peers.

However, some of these ideas that we look at as positive can also be looked at as negative. Both girls and boys have to deal with constant pictures on their feed of really skinny girls or really muscly boys that they feel they could never look like, which is where the realm of photoshop and photo editing techniques come in. It diminishes people’s confidence and makes them feel that they have to look a certain way. Many people know the twitter threads that roast a certain user because they said something they didn’t agree with or something that was just ignorant. Although most think it is funny, according to suicide statistics, there are about 123 suicides a day committed by teenagers – young adults, and researchers think that most are caused by social media.

Jacob Chaimovitch, a junior at SWHS, currently does not have any social media. When asked to elaborate he stated “I had instagram at one point, but got rid of it for a couple of reasons, mostly because of school but also other things. I deleted it beginning of freshman year, when it was getting more difficult to keep up and I would get distracted checking it all the time.”  I also asked him if he got off of it because he felt obligated to post pictures and he responded with “Yeah, i guess, but just checking what was on my feed, it felt like it was a distraction and I guess an obligation to check it, but I wanted to get away from that.”

I am not attempting to state another lecture that people have heard a million times from school counselors, but I am trying to state that people should not care as much. I have not posted on instagram since June of 2017, and its November 8, 2018. I do not think of it as being necessary to my daily life.  We rely on these things to help us to get friends and keep them, but social media doesn’t make us have more friends, it just makes an illusion that we do.